About the book: Physics from Planet Earth

Physics from Planet Earth (PPE), by Joseph C. Amato and Enrique J. Galvez, is a one-semester calculus-based introduction to classic 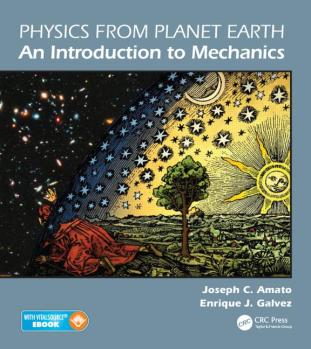 al mechanics intended for first-year college students studying physics, chemistry, astronomy, and engineering.  It is based on a highly successful course that has been taught at Colgate University for over 15 years, using materials that were developed and refined during the past two decades and updated continually to include present-day research developments.  The course differs from the traditional introductory course in several significant ways: (1) many topics are motivated or illustrated by contemporary applications in astronomy, planetary science, and space exploration; (2) the three conservation laws are introduced as fundamental laws of nature rather than as consequences of Newton’s Laws; (3) topics are arranged around the conservation laws, avoiding the “math overload” confronting students at the outset of the traditional course.   The book was published by Taylor & Francis/CRC Press in June 2015, and a fuller description can be found at https://www.crcpress.com/Physics-from-Planet-Earth—An-Introduction-to-Mechanics/Amato-Galvez/9781439867839 .

The book’s title and front cover image are meant to evoke its spirit and approach.  In physics, how we know is at least as important as what we know.  Our understanding of the world is based on the laws of physics, magnificent laws which were deduced during the past 400 years by men and women studying simple physical systems in their Earth-bound laboratories.  Our understanding of the universe is based on the bold assumption that those same laws govern behavior throughout the universe.  Based on those laws, a 17th Century sky-watcher envisioned a clockwork universe; in the 21st Century, those laws allow us to detect new planets (and ultimately new civilizations), black holes, dark matter, dark energy, and more.  Classical mechanics is the key to the cosmos.

Joe Amato earned his PhD in experimental solid state physics at Rutgers in 1975.  He began teaching at Colgate University in 1977, worked on accelerator physics at

Cornell in 1981-1984, and then returned to Colgate for the remainder of his career. There, he conducted research in low temperature physics (funded by the NSF and Research Corporation), physics education (funded by NSF), and most recently, granular materials.  He has been active in physics curriculum development and especially in the design of novel laboratory apparatus and exercises for introductory physics courses.  In 2008, he was named Professor of the Year by the Colgate chapter of the AAUP, and retired in 2009 as the William R. Kenan Jr. Professor of Physics.

e in 1986.  He has been a member of the faculty at Colgate University since 1988, and is currently the Charles A. Dana Professor of Physics and Astronomy.  His research focuses on atomic and optical physics, and physics education, and he has been funded by numerous grants from the NSF and Research Corporation.  His recent research projects include experimental atomic physics with Rydberg atoms, geometric phases in optics, and photon entanglement.  His educational work includes modernizing the introductory curriculum and developing new teaching laboratories for quantum mechanics.